Escape artist gets the money 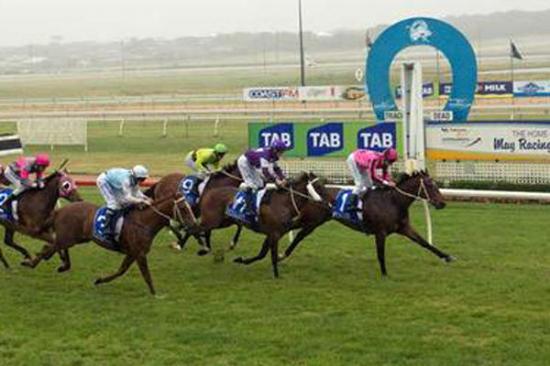 HOME-BRED gelding Freedom Beckons is best known as an escape artist but is quickly gaining recognition for his feats on the racetrack.

The four-year-old who has a knack of unlocking gates and getting loose, backed up his narrow defeat at his Geelong debut on November 8 with a strong win at Warrnambool on Monday.

Ridden by stable apprentice Josh Cartwright, the dominant $2.30 favourite could hardly have been more impressive with him fighting off two on -pace rivals to land the Cally Hotel Maiden Plate (1300m).

Freedom Beckons settled second outside the early leader Wondergun who faded to finish last while he beat off sixth placed Our Manhattan at the 200 metres after it had railed up and pushed him three wide approaching the home turn.

In the final 100m meters Freedom Beckons answered a third challenge from the Chris Calthorpe-trained Rubymay, fighting on strongly to score a half length win.

"It was a really good tough win and when the second horse came to him he kicked again," Cartwright said.

"He is still very green and he didn't want to settle early, but the horse is flying.

Emsley Lodge partners Peter Sandars and Jim Mann bred Freedom Beckons who is a son of Statue of Liberty from Pinsahoy making him a half brother to winning  Dash For Cash mare Dashahoy.

Freedom Beckons' gets his from the Statue of Liberty but it could just as easily be linked to his high jinx around the stable.

"Twice he has got loose at the farm," trainer Jamie Edwards recalled.

"He can actually undo his stable door and undo the clips on the paddock gates which are meant to be horse proof.

"He just stands there playing. He puts his foot on the gate and keeps bouncing the gate and playing with the chain until it unlocks.

"It is quite amazing."

On the track Freedom Beckons is very much untapped and he impresses Jamie with how he can do so much wrong and still win.

"He's been a horribly immature horse and still has a long way to go.

"He's got a lot to learn and he showed that at Warrnambool with the way he raced.

"He went a bit hard and was changing stride a lot the run, but I like young horses that can do a fair bit wrong and still win.

"He's only going to get better."