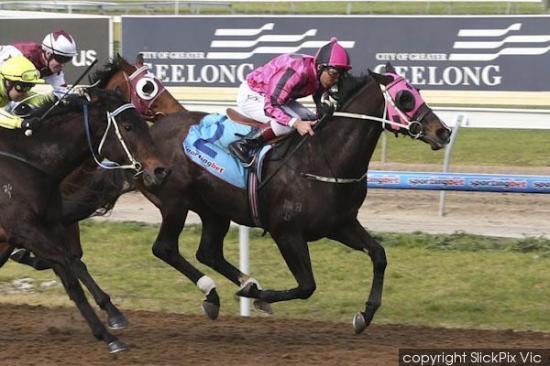 Former retired Singapore sprinter Merchant overcame a big weight disadvantage when he upset the heavily backed Lonhtime to score a tenacious win in near record time at Geelong on Sunday.

Champion jockey Damien Oliver was full of praise for the eight-year-old who with 59kg conceded 6.5kg to the Peter Moody-trained runner-up in the Adam Osburn Memorial Showcase BM78 Handicap (1200m).

In a true speed test from barrier to post, Merchant ($4.40) was quick from the gates and Oliver was surprised that Lohntime, backed from $3 to $2.60 favourite was able to go with him.

"I was a bit surprised with the speed of the second horse," Oliver said.

"He put it to us pretty early and had a big weight advantage, so he (Merchant) did a good job to fight it off."

Only a head separated the pair on the line in the time of 1:10.17 which was third fastest time on the Geelong synthetic since August 1 last year, and compared to the track record of 1:9.52 set in May 2013.

"He had galloped very well and he had a few things going for him with Damien Oliver and barrier one," Jamie said.

Merchant is a six-time winner in Singapore where he was trained by Cliff Brown, who shares the ownership with Greg Perry, manager of Greenwich Stud and a shareholder in the renowned Vinery Stud.

A gifted speedster Merchant boasts a two-length second to Rocket Man over 1200m at Kranji in 2011, but broke down with a suspensory injury in October 2012.

He was sent back to Australia to retire but after 18 months in the paddock his leg mended, and he was moving so freely that it was decided to give him another campaign.

Jamie has given the Merchant a good foundation for his comeback, bringing him up slowly and the rewards are coming.

He was collared on the post when second to Big Buddie at his Australian debut on the Geelong synthetic on June 25, but failed to handle the heavy track when unplaced at Caulfield a month later.

"He has shown us he is a top of the ground horse and we will pick our mark and run him on good tracks," Jamie said.

Merchant impresses Oliver with the way he builds momentum in his races and believes connections are in for plenty of fun times.

"He is a really strong horse who gets in a nice rhythm and keeps building," Oliver said.

"He travelled well (on Sunday) and when I asked him to go he gave me a really good feel."

Merchant is a dual 1400-metre winner and Jamie is keen to get him out to that trip this campaign.

"If he can get 1400 metres at the sort of speed he is showing us now, he should win a lot of races," Jamie said.