Sertorius mates up with "Viper" for BMW 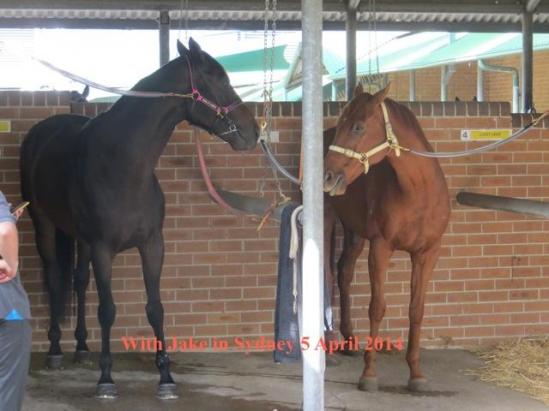 JAMIE Edwards believes recently retired moderate performer Viper Room is the secret weapon which can land Sertorius the first prize in the $2 million BMW Stakes (2400m) at Rosehill on Saturday.

Viper Room accompanied Sertorius to Sydney yesterday in the float and will also be with him at the races on Saturday.

As a racehorse Viper Room could boast six wins and stakemoney of $95,000 but he will be among the racing elite on Saturday next to Sertorius in the tying up stalls with his mission to keep Sertorius happy.

Viper Room is there to stop a repeat of Sertorius “having a melt down” as he did when he ran in the Ranvet Stakes eleven days ago.

“I was really disappointed when he went out on to the track as I thought he’d already run his race,” Edwards said.

“He just went to water and was in a muck lather in the mounting yard. He was also in the tie-up stalls by himself as the horses who were either side of him had raced and gone home,” he said.

“He needs a familiar face around him and that’s why I’ve taken Viper Room. He just buddies up with him and is a much happier horse.”

To Edwards surprise Sertorius finished fifth beaten just over three lengths not far from third placegetter It’s A Dundeel and beating Fiorente in.

“That really pleased me that effort so we decided to come back for the BMW Stakes,” he said.

Edwards decided to change his travel arrangements for Sertorius floating him to Sydney yesterday rather than on the eve of the race last time.

“I know I was tired and I would think Sertorius was too. It was his first night he’d ever spent away from home and he just didn’t settle.

“He travelled well last time so this time I’ve decided to leave on Wednesday morning and give him a couple of days to settle him.”

“I’ll probably put him on the treadmill tomorrow and then give him a swim on Friday,” he said yesterday.

“The others have to comeback to 2000m in the Queen Elizabeth Stakes in a fortnight’s time so they might have to be ridden conservatively. They wouldn’t want a gut buster.”

Sertorius drew barrier six and will be ridden by regular rider Ryan Maloney. He is a $13 with TAB with Fiorente favourite at $2.90.

“I’m going to leave there knowing that we’ve given it out best shot. He’s either up to Group 1 level or he isn’t and if he isn’t we’ll set our sights a bit lower,” he said.