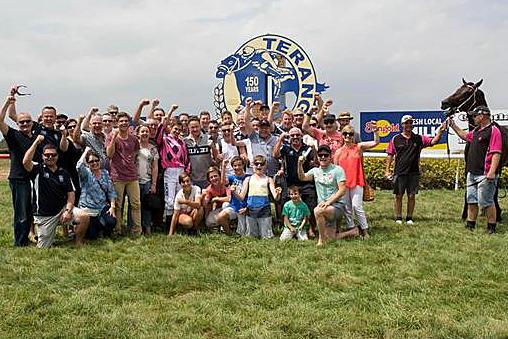 A LARGE band of excited owners almost drowned out the racecaller when Froffy led all the way to score an upset win at his race debut at Terang.
Stable apprentice Josh Cartwright said it was rare to hear the crowd while riding in a race, but cheers for the Bel Esprit three-year-old were clearly audible as he stormed to a length victory in the Sungold Milk 3YO Maiden Plate (1000m) on February 15.
“They were certainly very loud,” Josh said. “I could hear them at the 50 metres.”
Close to 40 people share in the ownership of Froffy including Geelong Mayor Darryn Lyons; Geelong star forward Tom Hawkins and his partner Emma Clapham; Adrian Buckley, who helped put the partnership together, and Emlsey Lodge co-owner Peter Sandars. Many of them were partners in Fill The Fridge. A cricket game was even on a delayed start so a few of the boys could be on track.
After making the pace and leading nearly two lengths on the home turn, Froffy looked vulnerable straightening up, but under the whip the last 200 metres he maintained a length lead to the line.
He beat Smokey Nic Nac, who had challenged Froffy the last 300m metres, and the Peter Moody-trained stakes placegetter Kona Breeze, who was backed from $1.40 to $1.35.
Co-trainer Jamie Edwards conceded it was hard to see Froffy ($8) beating Kona Breeze, who had last season run second to Metastasio and finished ahead of last year’s Cox Plate winner Shamus Award in a stakes race at Caulfield.
“When you have a horse that is stakes-placed running in a maiden at Terang you only look a mug trying to tip against it,” Jamie said.
“I expected the Moody horse to win the race and Froffy to be battling it out for second, but when the odds-on pop didn’t fire, it put us in a winning position and the horse was good enough to get the job done.
“The good thing is there is still a lot of improvement in him as he was still a bit fat.”
Josh Cartwright agreed the signs were positive for Froffy who he said still had a lot to learn.
“He was just floating in front,” Josh said. “He doesn’t really know what is going on yet and is pretty green.”
Jamie said it was great watching Froffy’s owners celebrate the win.
“I have trained a heap of winners but I don’t think I have see a group of people cheer a horse home more than they cheered Froffy home,” Jamie said.
“They all filled the members’ room after the race and the blokes at Terang were fantastic and kept serving them up beer.
“The owners all had such a great time they want Froffy to go back to Terang next start so they can do it all again.”