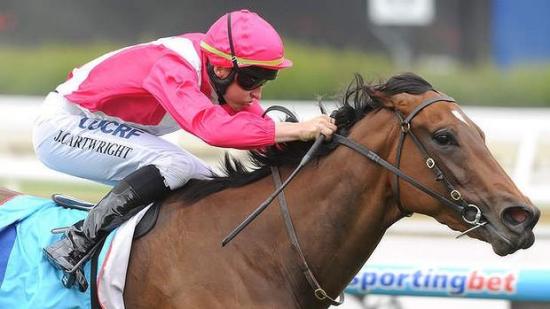 After making his debut in April 2011, Cartwright is now only two wins away from bringing up 100 career victories with today’s triumph his ninth in fifteen days.

Cartwright said the win was extra special being for Griffiths who has always been a great support.

“It was a very big thrill and I’d just like to thank Robbie Griffiths,” Cartwright said. “He’s supported me from day one and I’ve finally got my winner for him in town and I’m very happy.

“I’ve had about seven seconds in Melbourne so it has been a bit of a tough run but to get on a good horse like this is very good.

“I went through a couple of weeks of not riding a winner where I was just rushing things a bit, now I’ve slowed things down and kept everything smooth and I’m going really well.”

Settling in a perfect position one off the fence behind the leaders, Cartwright eased Romancingthestone ($3.80F) into the clear on the home turn.

Striding to the lead under a hold at the top of the straight, once Cartwright asked the daughter of Holy Roman Emporer to extend at the 200m mark she raced away to score by 2.3 lengths over Mitzi Del Bra ($6), with I Got A Turbo ($7.50) a further neck away in third.

Despite being only her second career victory in 12 starts, Romancingthestone has been placed six times including twice at Stakes level.