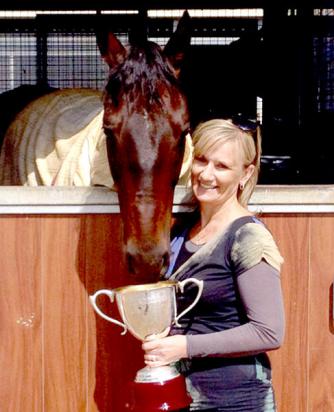 FIVE-YEAR-OLD Severn Road has always raced in the shadow of his more celebrated stablemate Sertorius, but he joined him as a country cup winner with a heart stopping victory at Traralgon.

For weeks Jamie Edwards and Bruce Ekington had planned the $50,000 UNIBET TRARALGON CUP (1900m) for Severn Road, but it came down to centimetres in the end with the son Al Maher scoring in a blanket finish on December 8.

“It was a race we set him for and it is great when a plan comes off,” Jamie Edwards said.

“He was in really good condition and very fit, and had to be forgiven for his lead up run as the heavy track didn’t suit him.”

Severn Road was beaten 10 lengths at Ballarat but three starts ago had finished a close third in the Ballan Cup (1518m) at Geelong.

Jamie had to convince Ryan Maloney to travel to Traralgon for the ride on Severn Road and the jockey was especially glad he did as he also rode another three winners on the card.

Maloney has been an important part of the Sertorius' success story, riding him almost every start, including to victory in the Bendigo Cup and getting his career best win on the gelding in last month’s Group Two Zipping Classic.

He gave Severn Road a superb ride from a wide gate, positioning him one off the rail in the third place at the winning post the first time.

He improved three wide at the 600m but it wasn’t until the last 50 metres that he got to the front and then held on tenaciously to beat Suspended Gem and pacemaker Alrouz by a long head and a short half head.

On the strength of his poor Ballarat run, Severn Road started at $12 and his win made up for his second in the Casterton Cup in May.

Jamie was particularly popular as his wife Janet owns Severn Road who has now won six of his 27 starts.