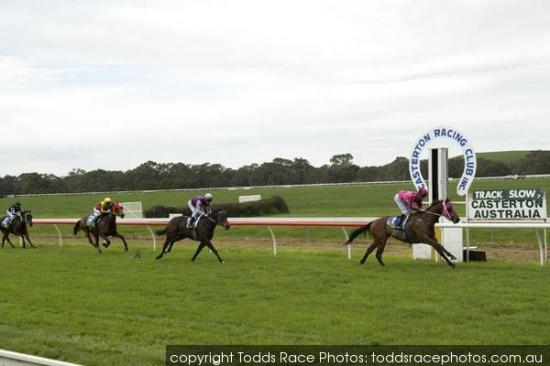 Promising mare Dashahoy became the first homebred winner trained at Emsley Lodge when she defied her dodgy legs to win at Casterton.
Ridden by Josh Cartwright, the four-year-old was having her seventh race start and took up the running early in the 1000-metres maiden, winning untouched by 2-1/2 lengths on September 15.
By Dash For Cash from unraced Pins mare Pinsahoy, Dashahoy is the first winner bred by Mike Palmer, who is best known as the owner of stable star Sertorius.
Emsley Lodge co-owners Jim Mann and Peter Sandars were also partners in the breeding of Dashahoy and they have retained part-ownership of the mare with Peter Lewis, Gordon Murdoch and Joe Suderi.
Dashahoy’s victory in the Casterton Electrics Maiden Plate  was particularly satisfying for co-trainers Jamie Edwards and Bruce Elkington who together relocated at Emsley Lodge at Freshwater Creek about two years ago.
Significantly, had Dashahoy not been trained at the complex, she may never have won a race.
“She doesn’t have the best of legs but being trained at the farm we have been able to keep her sound,” Jamie said.
“We have a great training facilities and working on the track up the hill has been a bonus for her.”
Dashahoy was carefully placed at Casterton after showing a marked improvement this campaign.
She was unplaced in three runs in her first race campaign, but this preparation finished third first-up at Geelong and second at Seymour before tiring on heavy track for fourth at Kilmore.
“She kept running into a couple of smart ones at the provincials which is probably what you are going to keep finding in the early spring, so we took her up the bush to try and get a win under her belt.
“She led most of the way and won really well.”