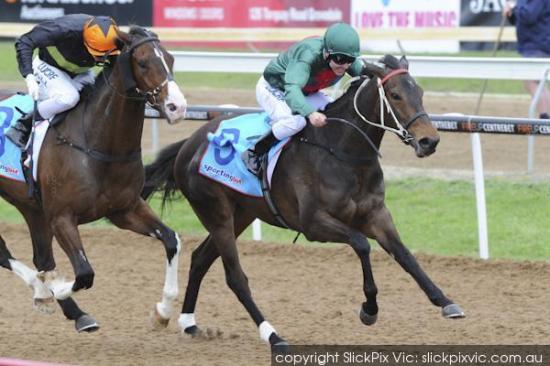 She was small, fat and slow, but Lerichi is now going places.
The four-year-old mare, who once looked destined for obscurity, posted her first win when she scored at Geelong on September 6 and suddenly looks to have a bright staying future.
“When she first arrived she was small, really fat and slow and we didn’t think she was any good at all,” co-trainer Jamie Edwards recalled.
He said Lerichi had improved at each of her two subsequent preparations and he believes she will continue to progress with maturity.
“When we brought her back she had improved a bit and she had a couple of starts where she was competitive without ever looking like winning a race, but this campaign  she has improved heaps again,” Jamie said.
“I reckon after this prep she will go to the paddock and come back even better.
“She can genuinely stay and she looks like she will get over a big trip which will be great as the mares' staying races are pretty weak.”
Lerichi, who cost $NZ6000 at the 2011 New Zealand Bloodstock Select Sale, is a daughter of Cox Plate winner Savabeel from a grand-daughter of the great dual Oaks winner Denise’s Joy, which boasts Tuesday Joy, Sunday joy, More Joyous, Pentastic, and Miss Danehill.
Lerichi’s dam Fuji Belle won four races to 2150m including three city events, and was fourth in Queensland’s Grand Prix Stakes.
Lerichi’s Geelong win in the Charles Rose Jewellers Maiden Plate (1900m) was only her fifth race start and she was third-up for the campaign.
Jockey Ryan Maloney had planned to ride her forward but she was beaten for speed and settled midfield before running home over the top of the leaders to score in a photo finish from Greek Legend.
Mike Palmer has so much faith in Lerichi and her pedigree that he bought Lerichi’s half sister by Guillotine for $NZ60,000 at the 2012 New Zealand Bloodstock Select Sale.
Jamie said the Guillotine filly was showing good promise on the track and hopes that she will race in the next few months.