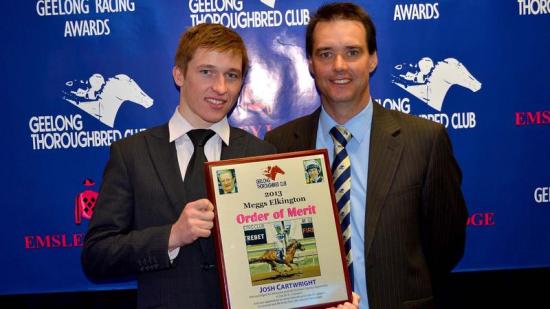 Bruce Elkington presented Josh with the Order Of Merit award at the Geelong Thoroughbred's Club's Geelong Racehorse of the Year Awards Gala Dinner on September 12.

His master Jamie Edwards said Josh matured quickly and became an integral part of Emlsey Lodge's success after Jamie broke his neck in a track fall in February.

"When I got injured Josh was asked to ride our better horses," Jamie recalled.

"It was his job to let Bruce know how each horse was going and in that time I we saw a young boy grow into a young man."

Josh said that he had been tremendously grateful for the guidance and care he had got from the Edwards family and Bruce Elkington since relocating from Albury more than a year ago.

"You wouldn't find better people to look after me," said Josh who described Jamie Edwards as "a great instructor."

"I don't know how much more I could thank my boss Jamie Edwards, and Bruce too," Josh said.

"He (Jamie) is a good person to learn off because he is so straight forward with everything."

Josh said his journey was only just starting and realises that only hard work will get him to the top of his profession.

"I have gone from riding 10 winners in a year and a half to riding 47 winners but you have just got keep stepping it up a level and never think that you are there," Josh said.