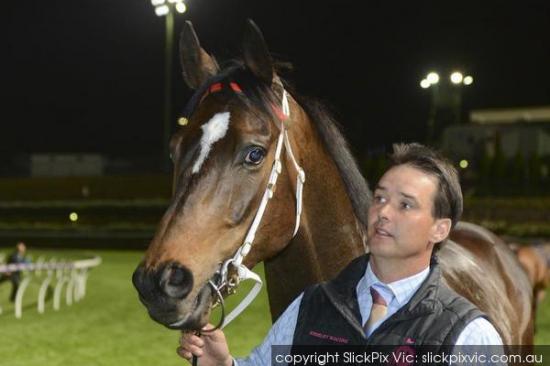 Toorak Handicap plans for Geelong Racehorse Of The Year Sertorius have been abandoned and the gelding will now target the Cranbourne Cup (2025m) a day later on October 13.
Co-trainers Jamie Edwards and Bruce Elkington made the decision with owner Mike Palmer after the five-year-old finished a brave second to Blackie in the Jeep Don't Hold Back Handicap (1500m ) at Moonee Valley last Friday.
“He is racing like a horse who wants 2000 metres or even 2400 metres,” Jamie said.
Last Friday night Sertorius was the first horse under pressure at the 600 metres at the Valley, but kept making ground four wide around the field to finish second, 3-1/2 lengths behind the winner Blackie.
“I knew after a furlong we were in trouble,” Jamie said.
“We wanted him box seated but he was eight or ten lengths off them and got beaten three or four so I reckon his sectionals will read out fantastic.”
The defeat failed to improve Sertorius’ 97-rating making it difficult to get a start in the Toorak, but Jamie said that the way the horse was racing and inclined to settle, he would not be able to win if  contesting the Group One feature over 1600 metres.
Despite the change of plan, the stable remains hopeful Sertorius will get his chance at Group One level this spring, depending on how he comes though his next two runs.
“He will go the Cranbourne Cup and then a $100,000 race over 2040 metres on Cox Plate Day,” Jamie said.
“We will see what happens after those runs, but we might look at the Mackinnon Stakes on Derby Day.”
The Group One $1 million Mackinnon Stakes (2000m) is a traditional path for many Melbourne Cup contenders.