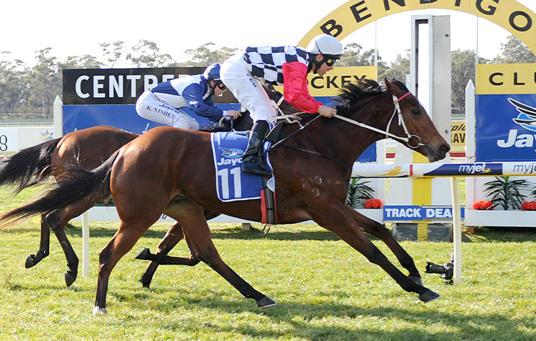 WELL-BRED three-year-old filly Sleek Beauty is shaping as an exciting prospect after a promising start to her racing career.
Bought at the Melbourne Premier Sale for $50,000 by long time stable client Domenic Romanelli, the daughter of Elusive Quality looks destined for much better races after posting her 1000-metre maiden win in empathic fashion at Bendigo on June 27.
The long neck victory over the highly fancied Danapaise was significant, with five lengths back to the rest of the field, and came 19 days after her encouraging debut second at Swan Hill.
Jamie Edwards believes there is still a lot of upside to the filly whose two-year-old half sister Montsegur won this year’s Group Three Bloodhorse Breeders Stakes, finished sixth in the Group One Blue Diamond Stakes and second in the fillies Group Three Blue Diamond Prelude.
Peter Snowden trains Montsegur and her four-year-old half brother Chiaroscuro who is a lightly raced winner at Geelong and Newcastle.
Bonaria, who won this year’s Group Three Schweppervescence Trophy at Flemington, is a three-quarter sister to Sleek Beauty’s three-time city winning Flying Spur dam Chatoyant.
“She is out a good family which is really building at the moment and hopefully this filly can enhance the family’s reputation,” Jamie said.
“She has been a really immature horse and had shin soreness problems, so we gave her an extra six months before taking her to the races.”
Jamie said that Sleek Beauty easily could have been unbeaten but cost herself a debut win when she rolled in behind the leader.
“She learned a fair bit from that race and really hit the line hard the last 100 metres second up after leader opened up good break on the field at the top of the straight,” Jamie said.
“The progression from her debut was quite significant and hopefully, with more racing, she will improve again.”
The immediate future is unclear at present, but there might be another run in her before she goes to the paddock for a late spring campaign.
A three-year-old fillies race over 1100 metres at Flemington on July 20 is an option if Sleek Beauty impresses enough on the track in the coming days.
“Being a Super VOBIS filly races like that are always tempting but we also want to look after her,” Jamie said.
Domenic Romanelli syndicated Sleek Beauty with his racing partner and Melbourne Racing Club treasurer Brodie Arnhold.
Domenic and Brodie share their horses around various stables and in May their familiar black and white checks and red sleeves were carried to victory by Second Effort for the second time in the Wangoom Handicap at Warrnambool.