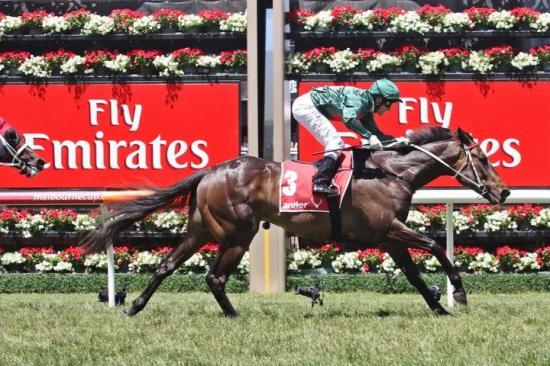 Elkington, who trains in partnership with Jamie Edwards, is eyeing off the $400,000 Group 1 David Jones Rose Clinic Toorak Handicap (1600m) at Caulfield on 12 October with the progressive gelding who has impressed since returning to his stable a fortnight ago.

“He has been back in work for about 10 days or so now and he’s come back in terrific order,” Elkington said.

“He had a good break after his terrific run in the Victoria Handicap at Caulfield and we couldn’t be happier with the horse.

“At this stage we’ve pencilled in the Bobbie Lewis (Quality), the 1200 metre race at Flemington (7 September), as his possible first-up run and then he’ll probably get a 1400 metre run under his belt.

“The main aim at this stage is the Toorak Handicap with him, it looks a lovely race for him at 1600m, he’ll get in reasonably down in the weights and, as he’s shown, he’s a very good miler.”

Sertorius was one of the finds of the 2012 spring, graduating from a Benchmark 78 win at Ararat in September to success in the Sale Cup (1600m) in October and a 0-95 Handicap (2000m) at Flemington on Emirates Stakes Day.

Those victories formed part a five-race winning streak for the son of Galileo, whose only blemish came at the end of his spring campaign when seventh, beaten four lengths by King Diamond, in the Listed Ballarat Cup (2200m)

Only seen once during a lightning autumn cameo, when runner-up behind the gifted Budriguez in the Group 3 Victoria Handicap (1400m) at Caulfield on 30 March, Elkington is confident the rising six-year-old can hit his peak this spring for his patient connections.

“He had a pretty tough spring last year, I think he had six runs, and we just felt that we didn’t want to leave him out in the paddock for six months,” Elkington said.

“We brought him back in with the intention of giving him that one run in the Victoria Handicap and then a nice little break which the horse has had, and now full steam ahead for the spring.

“The owner Mike Palmer is a terrific owner and he’s been very patient with his horse and he’s said to us all along that he’s in no hurry with this horse.

“We’ve always been of the opinion that he would get better the older he got and it’s certainly paying dividends now.”