A Celebrity Tale for Markovic 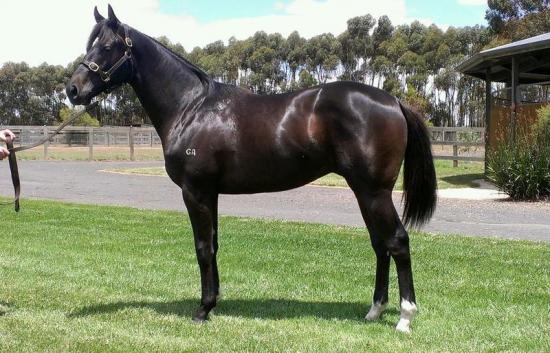 Dan Markovic, an impassioned owner, has launched his own syndication company titled 'Celebrity'. How fitting it is then to have Francesca Cumani explain the points of a horse, using, this black colt as her model for Markovic's first syndication offering.

By Tale of the Cat, a talented racehorse that won on the turf and dirt, including the Grade 2 King's Bishop Stakes by five-and-a-half lengths at Saratoga and is responsible for 84 stakes winners world-wide and was the standard bearer for his sire line Storm Cat in the southern hemisphere.

Tale of the Cat initially shuttled to New Zealand, from 1999, and was crowned the Leading Freshman Sire, before he was transferred to Coolmore Australia in 2003 on the back of that success.

When covering mares by Flying Spur, Tale of the Cat has 13-named progeny and of those eight have been to the races with six of them being recorded as winners. From those winners, Pureness (ex Purespeed) is credited with five wins from 14-starts along with a win in the Group 2 Ajax Stakes at Rosehill in 2011.

This colt was selected by Jamie Edwards out of the Magic Millions Premier sale, and, he notes that the colt is a very 'precocious type' and is already broken-in! With a number of shares already sold in this colt the balance will go quickly.

The syndicate will be managed by Dan Markovic from Celebrity Syndications.

Not Enough? This black colt is the first foal out of Tejano's Oasis, a winner of seven races in America over distances that ranged from 1000m to 1700meters. Amongst those seven wins is the Iowa Breeders' Oaks. Tejano's Oasis is out of the two time-winner and stakes placegetter, Midnightontheoasis (by Gulch) a three-quarter sister to Afleet One, in-turn the dam of Afleet Buck, a Listed winner in America. The extended family does feature multiple winners in Canada with a Canadian Derby winner also appearing in this family in the shape of, All For Victory (by One for All).

The female family does descend from a branch of a family that produced the outstanding champions Nijinsky (sire of 151 stakes winners including: Royal Academy, Green Dancer, Lammtarra) and The Minstrel (sire of 58 stakes winners including: Palace Music). Both horses are by Northern Dancer and both won the English and Irish Derby, the King George VI & Queen Elizabeth Stakes and the Dewhurst Stakes.

Tejano's Oasis is by Tejano Run, a winner of eight of his 21 starts and placed another 10-times, with his best win being in the Grade 2 Breeders' Futurity Stakes at Keeneland. Among Tejano Run's wins are three wins at Grade 3 level The Turfway Championship, Widener Handicap and Fort Harrod Stakes and a third placing in the Grade 1 Breeders' Cup Juvenile at Churchill Downs, in 1994.

Now at stud, Tejano Run is the sire of 10 stakes winners and has the Group 1 Italian Oaks winner, Dionisia (ex Essie's Maid) within those statistics. As a broodmare sire, Tejano Run's daughters have produced five stakes winners and 27 winners from just 44 starters, as of March 25th.
Horse Details

Included in the share price is the breaking-in fee, early education and pre-training expenses paid until June 30th, 2013. The Magic Millions race series nomination fee and insurance policy is paid until December 31st, 2013.