Mossailey sails in at bolters odds 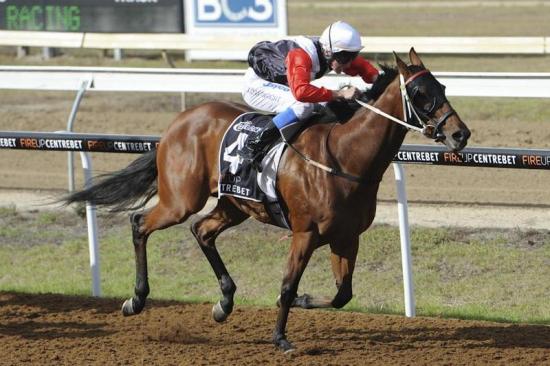 Consistent galloper Mossailey is on track to having his first ever city start after a timely return to winning form at Geelong.
The flashy-looking five-year-old started at $31 on his home track but defied the odds to land the “Join the Briseis Club” Handicap (1300m) in course record time on April 19.
Given a perfect ride by stable apprentice Josh Cartwright, Mossailey settled second and after taking the lead near the 200 metres charged away for a two-length win over Puerto Flamenco in 1-15.72.
It was Mossailey's fifth victory in 25 starts and his first under 1600 metres with punters deserting him after he finished last when resuming on a slow track at Ballarat which underlined his inability to handle rain affected ground.
“He was going super leading up to his Ballarat run and I couldn’t believe how badly he went,” Jamie Edwards said.
“We kept him nice and fresh for a firm surface on the synthetic at Geelong  and he turned his form around pretty quickly.”
Jamie said the challenge was finding more firm tracks during winter for Mossailey with limited opportunities for a horse of his class at Geelong and the city beckoning.
“He had a good prep last time in and the form around him at the provincials was great so he's come back with expectations that he will make it to city grade racing.” Jamie said.
“It is probably going to be bit a difficult to place him through winter so we want to get him to 2000 metres as quickly as we can.”
Jamie expects Mossailey to be competitive up to at least 78-class level over 2000 metres in town, and he is even keeping the Swan Hill Cup (1600m) open as an option.
“He’s more of a 2000-metre horse but he's won a couple of mile races and he would be down in the weights in a race like that,” Jamie said.
Mossailey’s owners include Singapore trainer Cliff Brown, who knows the galloper’s family well having trained his dam Diamond Hailey, winner of Adelaide’s 2005 Listed John D Lee Stakes, when based in Melbourne.