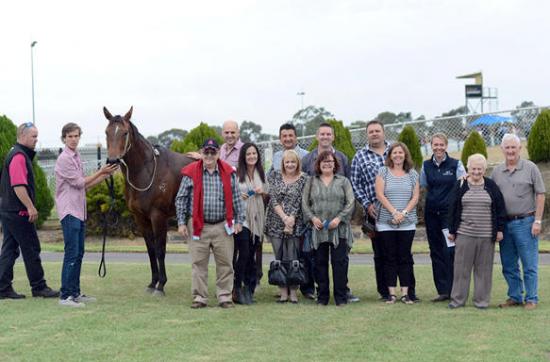 JAMIE Edwards was able to pay back some of the staff at Geelong Hospital who attended him after a horror track fall last month when They Call Me Bolt scored its first win for the stable at Geelong.

Ridden by Jack Hill, They Call Me Bolt jumped straight to the front before being steadied to share lead to the home turn.

The daughter of Gonski  and Falvelon mare Did You Call was headed briefly on the point of the turn, but she burst to a three-length lead soon after her jockey shook the reins.

Hill was able to ease back the throttle the last 50 metres, such was the dominance of the 3-3/4 length win.

They Call Me Bolt started $2.80 favourite and made amends for her stable debut at Colac where she finished second in a photo finish after leading until the post on February 24.

Jamie purchased They Call Me Bolt for $30,000 at the Inglis December Sale and shares in the filly were quickly snapped up.

Jamie said he was pleased that They Call Me Bolt was able to win so quickly for her new owners.

She had raced four times for her previous connections for two seconds and a third. Her only unplaced run was at Caulfield.

“She always showed good potential  and it is great for her to win for such good owners, particularly those at the hospital,” Jamie said.

Jamie broke his neck in a track fall when Trafalgar Legacy fractured its leg in a track gallop at Geelong on February 23.

Jamie needed surgery to insert screws and a plate to stabilise his injury, and is making a gradual recovery at home.