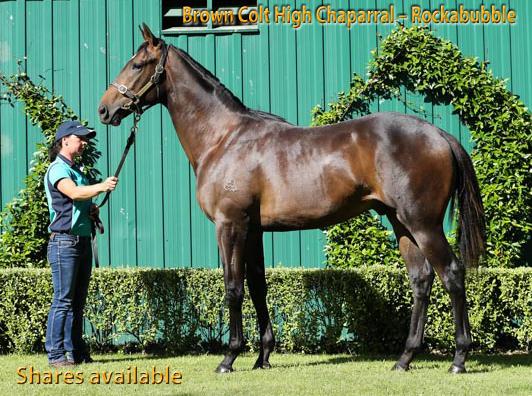 THE Edwards-Elkington team is well on its way to building a “classic” army.

The stable has targeted Oaks and Derby prospects at the recent Magic Millions and Karaka yearling sales with outstanding results.

Already five yearlings have been secured with Jamie and Bruce identifying weakness in the staying ranks that provides a great opportunity in the three-year-old features in the next couple years.

“We’re really excited about the yearlings we’ve bought in the last month or so,” Jamie said.

“We deliberately targeted the market for the Oaks and Derby types, having had a success with those sorts of horses in the past.”

Four well bred fillies and an imposing colt so far spearhead the stable’s prospects for the classics in 2014-15.

The new recruits are:

Jamie says: “She is a high quality filly with a Group One winning staying pedigree. Her dam Riva San won the Queensland Derby and Oaks so we feel we have the right sort of filly for races we want to target. She has already been syndicated to stable clients.

Jamie says: “She is a very attractive, pretty, filly with striking features and her half sister is Group One NZ Oaks runner-up Can't Keeper Dawn. Her dam is a Grosvenor winning mare at 2100 metres and closely related to Sneetch who was placed in the Group One NZ Oaks and who is the grand-dam of Group One Australian Derby winner and Group One Caulfield Cup runner-up Roman Emperor. We are rapt to bring her home and like most Darci Brahma’s she won’t be pushed early. Bruce Elkington’s brother, Kevin, and some long-time clients will race her.

Jamie says: “She is a top shelf, high quality Encosta De Lago filly with a Group One pedigree and was the number one pick at the Karaka sale for Mike Palmer, who is the owner of stable star Sertorius. She has enormous residual value as a broodmare being from a daughter of Danehill and was a city winner up to 2600 metres, second in the Listed Murray Bridge Cup and fourth in the Group One SA Oaks. This filly’s third dam was the mother of Group One Breeders Cup Turf winner Northern Spur.

Jamie says: “We didn’t go to New Zealand with the intention of buying a Flying Spur, that’s for sure, but once we saw this filly we fell in love with her. She is by a champion sire out of three-time city winning Zabeel mare who won up to 2200m. We really like her as an Oaks filly and her third dam was a half sister VRC Oaks winner Tristanagh. Emsley Lodge has syndicated her within the stable.

Jamie says: ”He’s a beautiful horse by the sire of So You Think, Shoot Out, Monaco Consul and It’s A Dundeel, out of a Group One winner of the New Zealand Thoroughbred Breeders Stakes. He’s as good a high quality staying type of horse as you will see anywhere. He’s an outstanding individual, bought purely to be set for the Derby as a three-year-old and has the temperament and a pedigree that could potentially see him become a sire. His vet check is A1 and we are very excited to have a horse of his sort of quality in our stable. We have retained 50 per cent and we are syndicating the other 50 per cent