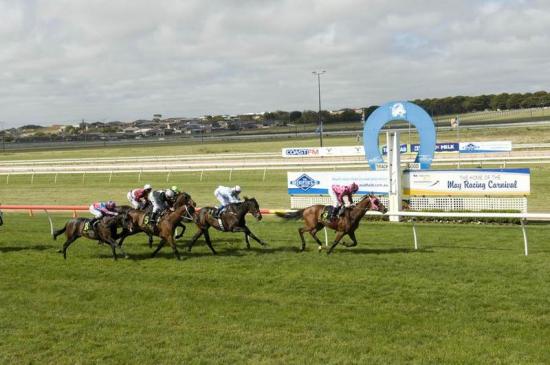 Bioko recorded back-to-back wins at Hamilton and Swan Hill in September and October before turning in three consistent efforts in slightly tougher company than he faced in his latest outing.

Bioko had to contend with a 59.5kg impost but an intelligent ride from jockey Dean Yendall proved enough to get the gelding home in a thrilling finish to the $17,500 event.

Yendall was content to give Bioko a comfortable midfield trail from barrier one but a slow tempo threatened to ruin the eight-year-old’s chances of making  up the required ground in the straight.

The jockey asked Bioko to quicken rounding the home turn before the son of Jungle Pocket dug deep over the concluding stages to get up to defeat the pacesetter Rael Rules on the line, recording his eighth win and take his earnings to more than $150,000.

Smart prospect Torsion showed his potential when he completed the stable’s dual success in emphatic fashion in the Baillie’s Logistics Rating 62 Handicap (1700m).

Torsion turned in excellent efforts over shorter trips in his two runs back from a six-week let-up before relishing the step up to 1700 metres at Warrnambool.

Jockey Ryan Maloney had a little bit of work to do after Torsion worked forward to sit outside the leader after he initially settled behind the speed.

Torsion hit the front early in the straight but had too much talent for his opposition in the straight, drawing away to score by 1-1/2 lengths, notching his second win from eight starts.

Congratulations to the owners of both horses.

Click here to see how Bioko posted his latest success of click here for a replay of Torsion’s win at Warrnambool.