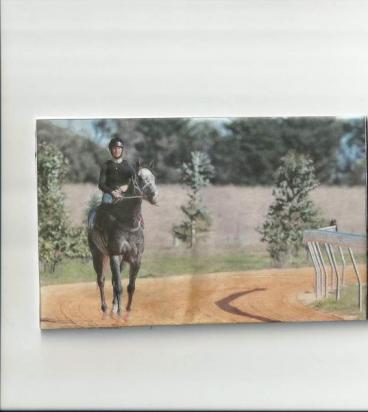 Don't look at Kaptain Kosmos when he walks and trots of a morning, you'd say he couldn't win a race, says co-trainer Jamie Edwards.

But when Kaptain Kosmos canters he feels great, Edwards says.

But the grey five-year-old gelding has been a continual nightmare for the Edwards / Elkington team to prepare for racing.

"He's a really interesting horse,one morning he can be fine and that afternoon when you take him for a walk, he'll be limping around the place," Edwards said."I have had just about every Vet in Victoria look at him and they all just shake their head and don't know the exact problem."

"We've done shock treatment, we've tried cortisoneand Phenylbutozone (anti-inflammatories), everthing that the Vets say to try on him and it hasn't helped at all.They can't understand why he races so well."

Kaptain Kosmos has had 12 starts for three wins, one second and two thirds and two of those wins and the second have come in the past two months.

Edwards has been simply too frightened to race him for much of his career, fearing he might break down."Ive always been real easy on him so I've never had him fully fit" he said."But now that I've done every test on him, I know I am not going to break him down as such, I'm not going to smash a cannon bone or something like that. He's been x-rayed and scanned so many times. The horse is ok so now when he needs a gallop. I give him a gallop. It's a funny sort of thing, we have pressed on with him and now he's fit and coping."

Edwards is aiming Kaptain Kosmos for a rating 0-72 Hcp(1400m) on the second day of the Warrnambool May racing carnival."His last two wins have been at Warrnambool, he'll either go straight there or he might have a run at Hamilton in between if I think he needs another run," Edwards said.

"To see him racing competitively is just fantastic. Everyone at the stable loves him, he is such a nice horse and they appreciate how hard he is to train as far as his soundness goes," Edwards said.

Article taken from "Trackside" with Dennis Craven at the Geelong Advertiser . Saturday 7/4/2012.