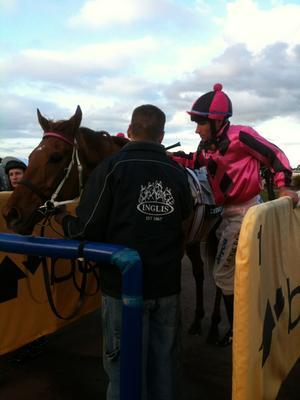 A bold front running performance by Lincoln Coffey saw our 4YO Golden Snake gelding  VIPER ROOM bring up his 2nd win in a row at Geelong on Tuesday 26th of July.

He was sent to the front early by Lincoln Coffey and managed to hold off a challenge in the straight from the heavily backed favorite Next Top Model and the fast finishing Fightingforfame.

Edwards co-trainer of Viper Room said "he is a tough, sound horse who tries his best and showed us his versatility this prep by winning on both a slow rated track at Tatura and the synthetic at Geelong".

He steps up in class for his next start which will be on the synthetic again. So Congratulations and Good Luck to loyal stable supporters Ron and Marg Tatti for Jakes next run.