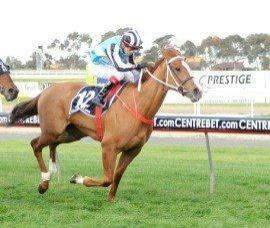 Handy Geelong chestnut mare Golden Portrait will go through the sale ring this month,despite her win at Pakenham last Monday.

Co-Trainer Jamie Edwards said Lara owners Aaron and Debbie Kingshott had other young promising horses about to start their careers.

"You could say they lost their patience with Golden Portrait when she'd failed to fire this year". Edwards said. "I put it down to a fall she had in a race at Sandown 18 months ago, she lost all confidence in racing" Edwards said.

She wouldn't race on the inside of horses and we tried blinkers on her and all that sort of stuff, but with the blinkers she kept missing the start.

"So two starts ago at Hamilton we took the blinkers off and told the rider to take her to the front so there were no horses around her.

"She did that and went enormous but didn't run out the 1600m. So we dropped her back to 1400m at Pakenham and told Brad Rawiller to lead on her and keep her out of trouble and it worked out ok".

Golden Portrait a four year-old mare by Perugino, has had three wins, two seconds and seven thirds from 27 starts for $55,000 in prizemoney. "At least  the owners got a little bonus before she gets sold," Edwards said. "It would be nice if we could squeeze another win in before she goes to the Inglis sales at Oaklands Junction on May 20."