De Arias Back In The Winners Circle 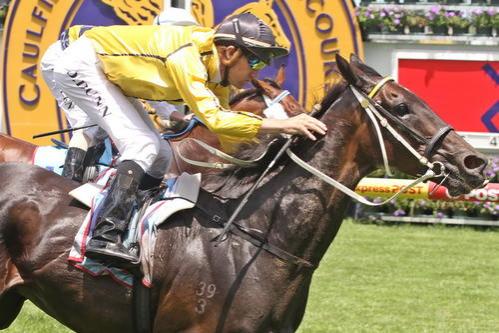 Seven-year-old De Arias, who was gaining a reputation as a non-winner, finally got some overdue luck to break an 18-month drought at Caulfield.

Trained by Jamie Edwards and Bruce Elkington, the gelding was last turning for home but somehow jockey Dwayne Dunn found a passage through the field to land the Braywin Handicap (2000m).

The stable had hoped to win the Kyneton Cup with De Arias two starts ago and he flew home to finish third while last start he was beaten in a photo finish at Moonee Valley.

Dunn rode De Arias at the Valley and thoughts of again running out of luck on the horse raced through his mind when he was disappointed for a run.

"He probably should have won at the Valley when I rode him and that thought was going through my mind again," Dunn said.

"Once he got to the outside and the inside horses crabbed out a little bit, it probably made him very competitive and his last 50 to 100 metres was very, very strong.

De Arias ($17) copped a buffeting in the straight trying to get a clear run but got through in time to score by a half length from favourite Ishant and ($3.70) and Golago ($41).

"The horse has raced in terrific form without winning a race for a long time but he probably makes his own bad luck as much as jockeys making mistakes on him," Dunn said.

"We had to duck and weave our way through and he put his head there at the right time."

Edwards said De Arias' campaign had been geared towards the Kyneton Cup and since then the only goal had been to win a race with him.

"His last three or four runs have been super and it is great for him to win a race." Edwards said.

"Even today he got knocked down two or three times but got that little bit of luck that counted."

Taken from Racing and Sports.