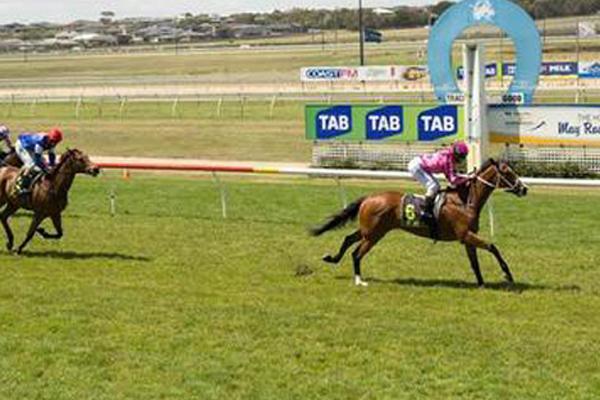 PROGRESSIVE four-year-old GiGi Girl made it back-to-back wins when she scored at Warrnambool on Monday but remains a fair way off realising her potential.

After posting a 3-1/4 length maiden victory at a Kilmore two weeks ago, she stepped up in class and distance to score just as emphatically in the Graham's Cleaning Supplies Hcp (1700m).

Owned by Wayne and Julie Jennings and breeder Greg Perry, GiGi Girl won both races the hard way, refusing the settle and racing with her head up which has become a familiar trait for the mare who clearly has loads of talent.

Trainer Jamie Edwards said the daughter of More Than Ready was a work in progress and he is picking easier targets for her while she refuses to settle in her races.

“She won her maiden impressively and it would have been pretty easy to step her up a fair bit in class, but we want to keep her in as low a grade as possible while she is still doing things wrong,” Jamie said.

“One day the penny will drop and she will relax, and when she does I think she might be quite special.

“She has real turn of foot and she runs serious times on the training track.”

Jockey Craig Robertson said GiGi Girl was a difficult mare to ride but is excited about what she may accomplish.

“The day she learns to really settle and really relax I think she will go straight to town and win a little mares race for sure,” Robertson said.

GiGi Girl’s Warrnambool win was all the more meritorious as she was held up on the home turn before dashing through a gap at the top of the straight and hitting the front at the 200 metres.

Heavily backed favourite Spunlago emerged from the pack and gave chase but GiGi Girl, two lengths in front, put on the afterburners in the last 100 metres.

While having a tendency to run about she increased her lead and beating Spunlago by 3-1/4 lengths win, with another two lengths back to Marlap’s Destiny.

“She was going very easily on the corner and three or four strides after I asked her to quicken she really let down and put it beyond doubt,” Robertson said.