Fridge Too Cool For Boxing Day at Geelong 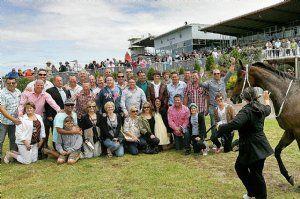 HUNDREDS of Geelong racegoers got the perfect Christmas present when Fill The Fridge won at the big Geelong Boxing Day race meeting.

Fill The Fridge was backed from $2.60 to $2 favourite with bookmakers and the crowd cheered loudly as Fill The Fridge cruised to a three quarter length win over Skimalong ($13) with Classic Cameo ($11) a length away third in race three, The Echo 3YO Maiden (1300m).

Fill The Fridge is raced by more than 25 Geelong owners and is trained at Freshwater Creek by Jamie Edwards and Bruce Elkington.

The three-year-old filly has created enormous interest in local racing circles after two seconds at Ballarat at her first two starts.

The owners and their friends had been anxiously awaiting Fill The Fridge to race on their home track.

Co-trainer Jamie Edwards felt the weight of expectation on Fill The Fridge's performance.

"Her trackwork was quite good during the week and I was very, very confident but it's hard to tell 40 blokes to have a big go," Edwards said.

"The boys all had a bet, which is great. I was a bit worried at the top of the straight when jockey Ryan Maloney couldn't get clear but once he got out the filly came away pretty easily. She is going to be a nice little horse," Edwards said.

Among the happy owners was breeder Anthony Mithen who asked Edwards to find owners to race Fill The Fridge who is by Barely a Moment from good producer Belgo.

The ownership numbers grew when friends bought asked to buy into the $1000 shares once they were sold.

Edwards believes 1600m will be ideal for Fill The Fridge and might look for a suitable fillies race at Moonee Valley.

Edwards said the main aim of this campaign was to win a race and it's taken him two more starts than what he thought it would.

Taken from the Geelong Advertiser