Empire strikes back for “Bluey” 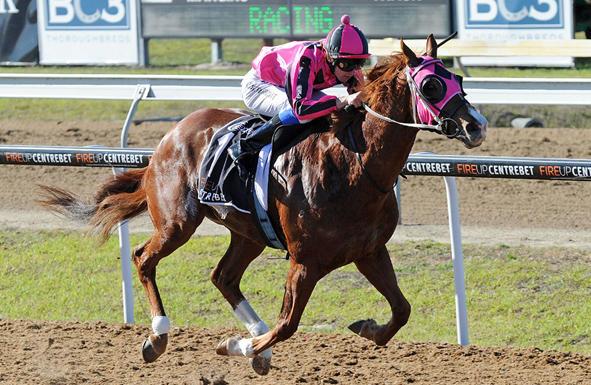 IT was as if four-year-old Empire Of Stone knew his managing owner Tim “Bluey” McGrath was doing it tough.

Just days after the 42-year-old former champion Geelong Football Club defender announced that he was battling stage-three melanoma, the son of Starcraft, having his 16th race start, broke through with his maiden win at Geelong on July 9.

Tim lives in the same street as Jamie and his family, and they were thrilled that Empire Of Stone was able to win for "Bluey"  at such a challenging time.

“Tim is obviously going through a battle at the moment and hopefully the win will be a tonic,” Jamie said.

McGrath has been a partner in Empire Of Stone for all of his 16 starts but when the original syndicate disbanded he bought the son of Starcraft at a tried sale for $9000, and transferred him from the Mark Kavanagh yard to the Edwards-Elkington stable.

Empire Of Stone showed potential as a middle distance horse, but his tendency to over-race worked too much against him.

“The thought that was the horse was going to get over a trip, but he was over-racing a fair bit so we decided to freshen him right up and try sprinting him which seems to have worked really well,” Jamie said.

Stable apprentice Josh Cartwright rode Empire Of Stone, who was having his ninth start for the stable when he won the Geelong Cup Packages 23rd October Maiden Plate (1100m).

The chestnut jumped straight to the front from his wide gate and ran strongly to the line to win by 2-1/2 lengths.

Empire Of Stone has also posted two seconds and two thirds since being trained as a sprinter.

“There are no high expectations, but he is a very sound and nice looking horse, and now we have worked him out we will try and win another similar type of race with him.” Jamie said.