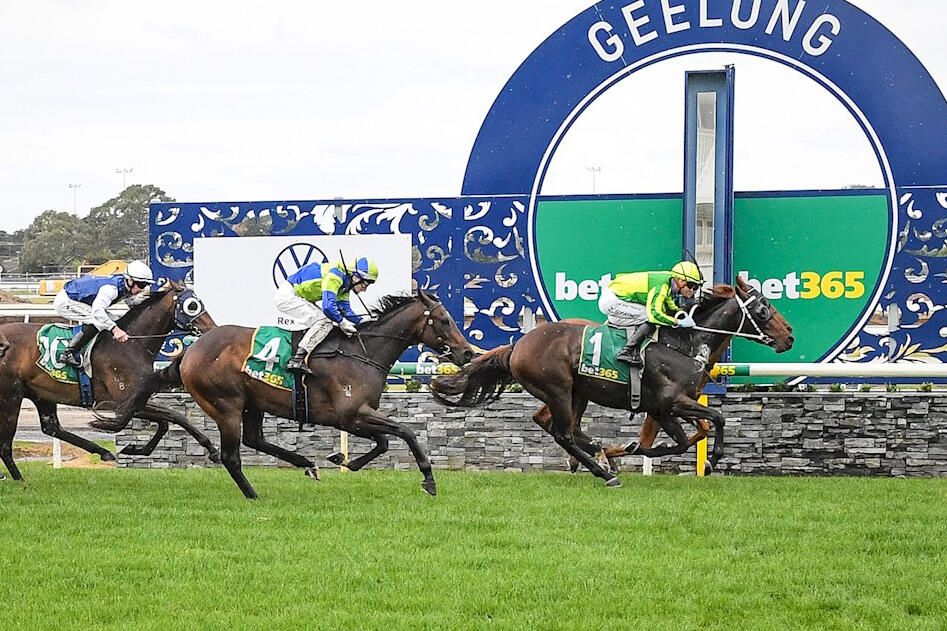 Lightly raced four-year-old Lucamour gave his winter prospects a handy boost when he overcame a wide run on a bog track to dead-heat first-up at Geelong on Tuesday.

“He looks like having a nice future,” trainer Jamie Edwards said of the Lucas Cranach gelding who hit the line together with pacemaker Syrup in the McGrath Estate Agents Maiden (1406m).

“You never know how they will handle a heavy 10 until you try them on it, but he was very good on it today and we can look forward with plenty of confidence with him this winter,” Jamie added.

Ridden by Zac Spain, Lucamour flew the gates from the outside barrier and despite being eased back early was caught wide all the way.

He improved under a hold to third, two lengths behind the leader Syrup at the 700 metres and after closing strongly the final 200 metres lunged on the line with many on course thinking he had just won, including race caller Adam Crettenden.

However on closer inspection the judge could not split Lucamour ($7) and Syrup ($8), with Calmsir ($14) finishing a length away in third place.

Lucamour has always looked a promising stayer and but immaturity held him back.

Last year in his first campaign he raced three times for a couple of midfield finishes before pulling up shinsore after a handy third over 2060m at Cranbourne in October.

After that run he was given three months in the paddock, and had done a long steady build up leading into Tuesday’s assignment.

“It was a good tough effort first-up and he will take natural improvement from the run, so it’s pretty exciting looking ahead with him in longer races,” Jamie said.